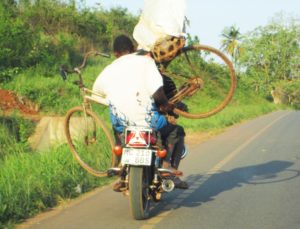 It’s nearly 12 weeks since we touched down in ‘Delightful Dar’ and made our way back to Morogoro.  The house was still in one piece; the night-guard had done his job and although our dog (affectionately referred to as the ginger maggot by some!) was a bit thinner, she was very much alive and happy to see us!  Everywhere looked very dry and dusty compared to the early autumnal Wiltshire that we’d just left, and of course that wasn’t the only comparison that we found ourselves musing over.  However, it was definitely different this time round.  We were returning to the familiar: our home, our team, our roles, even the language was now somewhat familiar!  And we were pleased to find that within just a few days, we seemed to have stepped relatively seamlessly from one culture into another and into the routine of life here in Tanzania.  It had been tough for me (Steve) gearing up to return from such an awesome home assignment and, as some of you will know, I was not exactly champing at the bit to get back here!  However, once we were back, there was a feeling of familiarity and that this is where we’re meant to be for the next term.  And those feelings made it easier to say to myself: “I’ve had a great HA but this is now what God would have us do, so get on with it!” Life on the road: Over the last couple of months the car has clocked up over 4,000 miles, much of that in connection with my unit leader role, visiting AIM personnel, some of whom live in some pretty remote locations.  Journeys in Africa are often not as straightforward as they are in Wiltshire, which I guess often relieves the boredom normally associated with sitting in a car!  There are the humps and bumps in the road to look out for, as well as the broken-down trucks and vehicle debris lying around, not to mention the numerous police checkpoints.  Detours and diversions can be a regular feature, either to avoid accidents blocking the road, or from having to rumble across untarred land running parallel to the main road which is being worked on!  On two recent journeys we came across large-scale roadworks that went on for 50 mile stretches, and, on another, we had to get out on a steep hillside track to remove some hefty stones so as not to rip out the bottom of our Subaru!

It definitely beats sitting on the M25 but it does mean the car needs more regular servicing!  I return from these journeys in awe of the folks who have settled in such locations; their dedication to living out the gospel in areas where Christ is not really known is wonderful to see.

Our first journey happened within a week of landing in Tanzania, to a town way out west called Njombe.  Ruth and I were helping to facilitate and organise an IBM pastors’ conference, although the teaching was being done by a Tanzanian pastor.  I did manage a 20 minute devotional one morning in Swahili and was encouraged to find I hadn’t forgotten too much!

One thing we hadn’t prepared for was the temperature in Njombe!  We peeled back the curtains on our first morning to find the mist was down and the thermometer was showing a cool 10 degrees; at least 15 degrees lower than we’re used to in Morogoro!  Due to the fact that the expected church dress for a lady here in Tanzania is always a long skirt, Ruth had to nip down to a local market stall to buy a pair of ‘secret’ leggings in a bid to keep the temperatures up!  Despite the power cuts and the lack of hot water, it was a good conference and it was encouraging to see the response of the pastors when challenged about the issue of mission in the Tanzanian church.

Preaching in a sauna!
To the other extreme, certainly in terms of temperatures, just a few weeks later I found myself way down in the south of the country, near to the border with Mozambique, at a church in the cul-de-sac town of Mtwara.  I was preaching at a church that resembled a sauna, not in appearance but certainly in terms of sweat levels!  I’ve come to appreciate why many Tanzanian pastors carry a flannel with them into the pulpit!!  A combination of factors (sun, humidity, tin roof and lack of working fans in the church) made for a lot of perspiration, and I found that those humid conditions tend not to help the preacher in his cause.  A number of nodding heads could be seen from my vantage point, and I don’t think that was because they were agreeing with my scriptural musings! Three hours after the choir had started their first number, and after four separate collections and a sermonette of comfort to a grieving daughter, it was time for the service to close – but not before I was presented with a giant watermelon which someone had donated to me following their winning bid in the ‘perishable goods’ auction!  I was thankful that I had the car with me and that no one had decided to donate a live chicken to the auction, which has actually happened in the past! 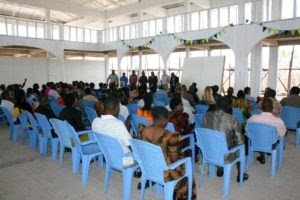 Sanga Conference Centre – the opening!   Meanwhile back at the ranch, the middle of November saw the opening of the conference centre at Sanga Sanga.  Building work commenced in June 2015 and, although the project is still some way from being finished, the completion of the roof meant that we could use the facility for a large gathering of AICT pastors – over 85 in attendance.  The ceremonial ribbon was cut and the veil that separated the fancy marble plaque from the watching eyes was torn in two from side to side!  It was a great moment for ‘Matt the Builder’, Tony Swanson (who has

championed this cause) and for IBM which will soon have a base to work out of.  The spacious meeting room, which is yet to be walled, had a different feel to last year’s venue, which was the containerised pump house!  We look forward to the day when we’re open

for business and God’s Word is being taught there on a regular basis.

Our staff at Sanga pulled out all the stops to make sure the conference went well, working from dawn till dusk, and sometimes well beyond.  Even one of the general labourers was pressed into catering action, donning an apron and a chef’s hat to serve the long line of hungry pastors!  It was a case of “all hands on deck” during the event, and this very much applied on one particular evening when a large bush fire began rampaging through the Sanga site.

The cooks, cleaners and labourers, who had been clearing up after the evening meal, immediately turned into firefighters!  After an hour of beating flames with nothing more than small tree branches, the fire was put out and the workers returned to base (some nursing their singed arms!) to deal with the washing up!  All in a day’s work for our dedicated staff! 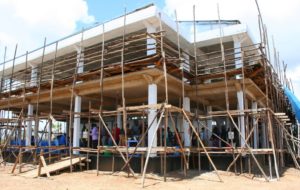 Back to School!
Cast your mind back to the start of our Tanzanian journey and our period of language learning. I seem to remember writing about the undiluted ‘pleasures’ of grappling with another language and the joys of wrestling with nouns, verbs and Swahili tenses. I also remember telling you of my annoyance at having read the phrase “Swahili is one of the easiest languages to learn”, and how the mental gymnastics of language learning had wearied the body, dulled the senses, and made my head hurt!  Well, that was three years ago!  And now we’re back at the very same school, albeit in the very un-schoolish surrounds of the Rivervalley Campsite out in the Tanzanian bush.

Unlike last time, where we grappled with grammar for three months, this time we’re here for just three weeks, which I think is more manageable for a guy who’s not a born linguist!  We’ve definitely grown in our use of Swahili (some more than others!) but we felt it would be helpful, at the start of our second term here, to get back into the classroom.  It’s a time of intense learning away from our day-to-day activities, where we can hopefully concentrate on moving up a level, expanding our vocab, and going over the stuff that we’ve forgotten.  By the end of these three weeks I know that my head will be hurting!  Oh, to be one of the disciples on the day of Pentecost when the Spirit was poured out upon them!  Imagine how it felt for them as they spoke clearly in other languages without having to learn them!  I can only dream on! 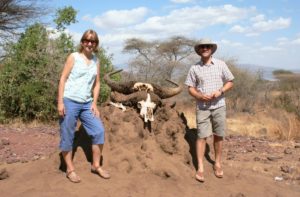 Thank you so much for your prayers and support.  We wish you a very happy and blessed Christmas.

PS: Oak Hall Expeditions and AIM are teaming up next summer to offer a holiday/taste of mission trip to Tanzania.  If you’re interested click here.