From “The Shed” to “The Warehouse”!  Last Sunday Ruth and I returned to AICT Dakawa – the ‘Shed’ Church – for the first time since last February.  However, there wasn’t much activity in the lean-to shed adjacent to the church leader’s house because the new partly-finished church building, just 100 yards away, is now in use.  Compared to the shed it feels like a cavernous warehouse, especially when there are only 30 people sitting inside!  There’s still work to be done (cementing the earthen floor, fitting the remaining window grilles and doors) but it’s testament to the dedication of the members that they are even at this stage, having only begun eighteen months ago!  Listening to the notices I worked out that their average weekly collection is about £5.50, so goodness knows how they’ve managed it!

The choir danced and sung, the generator spluttered outside, the microphone hummed, and the boy on the keyboard insisted on playing sound effects whenever the leader finished a sentence!  It was amusing at first but after 2.5 hours not so much!  From a preaching point of view there were certainly fewer distractions, although I might just miss those pesky cockerels which used to hang around ‘the shed’!  I preached in Swahili on the letter to the church at Ephesus from Revelation 2 where Jesus rebukes the church for having lost their first love – and so the focus turned to our love for the Lord, and for each other.  Putting it into practice is always the hard part but I did manage to shake hands with the boy on the keyboard afterwards!!

An adventure by rail!  I attended Unit Leader meetings in Nairobi in January and decided to do the first leg of my journey using a different mode of transport!  Despite a couple of raised eyebrows from colleagues here, I chose to travel from Morogoro to Dar by rail.  You may well question the raising of eyebrows at such a choice but when there’s only one ‘deluxe’ train a week that doesn’t guarantee delivering you to your destination on the same day, it becomes a bit more understandable.  It took me 6.5 hours, sitting in a surprisingly new and comfortable carriage, to travel 115 miles.  That means that the average speed was 18 mph!!  I had ample time to watch the Tanzanian world go by, even though it was accompanied by the monotonous drone of African rap music echoing down the carriage!  Still, it was much preferred to the alternative coach journey and it did take out the risk of getting stopped by the traffic police had I gone by car!

That being said, having mentioned the word ‘risk’, imagine my surprise just two weeks later to read in the newspaper that the very same train had derailed on its way to Dar!  Apparently the intense sun had buckled the rails and the driver, despite maxing out at 18 mph, hadn’t been able to stop in time!  So maybe there was some justification in those raised eyebrows after all!

Anyone for a stroll?!  For those who tend to get a bit wobbly when the word ‘snake’ is mentioned, avoid this paragraph!  During our New Year team retreat in the idyllic surrounds of Masumbo Camp, Iringa, the suggestion of a stroll to the river rapids sounded very non-threatening.  But this is Africa!  We enjoyed some bouldering as we clambered over the rocks near the half-empty river, but not before encountering a rather fattened Puff Adder!  We were walking single-file through the bush when, suddenly, I froze mid-stride because a few feet away, lying right next to the path, was a 3ft snake.  This is how Wikipedia describes it: “The African Puff Adder is responsible for causing the most snakebite fatalities in Africa.  It’s normally a sluggish species and relies on camouflage for protection, but as its Latin name implies, it can strike violently.  If disturbed they will hiss or puff loudly, adopting a tightly coiled defensive posture.  They may strike suddenly and at a high speed, to the side as easily as forwards.”  Well, it was indeed sluggish and camouflaged, but we were mighty thankful that we didn’t experience the rest of the description!  In fact, it didn’t move a muscle, except for its tongue which was busy sensing our whereabouts!  We backed up rather slowly, gave it a wide birth, and continued on our merry way, mindful of the fact that for many a rural African, such encounters don’t end as well as ours did.  The remainder of our retreat was spent talking and praying through team issues, relaxing in our little hobbit holes, and playing pickleball!  Ruth organized our New Year’s Eve celebration with party games, poetry and sparklers!  We closed our time together with a communion service, sitting around a campfire under the African stars accompanied by a gaggle of glow worms!

Power Encounters: One of the joys of being unit leader is that I hear about what happens in other ministries and locations around Tanzania.  Whilst I sometimes hear stories that make it seem that there’s not much visible fruit, I also hear stories that thrill the heart and reassure me that what we’re doing is certainly not in vain!  Over the last few months it does seem as though a few exciting things are beginning to happen in places considered to be ‘unreached’ with the gospel.  One particular team is rejoicing over a number of healings, a baptism in the sea, and a neighbour who came to Christ.  Another small team in a rural village is rejoicing that a guy, who asked them for a copy of the New Testament so that he could compare it with the writings of his religion, has now decided to give his life to Christ.  He’s since been baptised and has changed his name to reflect this!

Just a few weeks ago, I heard from another small team where ‘the light of the Gospel is beginning to shine and the Holy Spirit is at work.’  The team had only been in situ for a few weeks and was looking at ways to reach out into the community.  A number of students at a local primary school had been experiencing demonic attacks and their religious leaders had already ‘prayed’ for them, but with no result.  The team offered to pray for the students and, somewhat surprisingly, their offer was accepted!  When they arrived to pray there were 26 children in the classroom who had been suffering from these attacks!  The team was able to share the gospel and, during a mammoth three-hour prayer session, some of the students were delivered from demons!  God provided this incredible opportunity for this team and already there are signs that a number of people are keen to know more about Jesus.  Please pray for this ongoing situation and for the protection of the team as they continue to shine their light into what has been a very dark community.

Stories like these warm the heart don’t they?  They open our eyes, broaden the mind, deepen and refresh our faith, and even challenge some of our beliefs!  They encourage us to pray and they cause us to rejoice in a God who is still in the business of changing lives and moving powerfully against the enemy.  Despite the hiccups that we sometimes experience within the Church, it’s great to know that people are being introduced to the gospel, lives are being changed, disciples are being made, and His Church is being built and strengthened through a whole range of ministries. 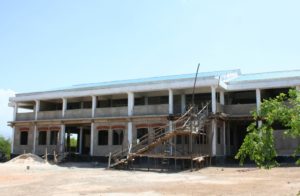 The conference centre at Sanga has certainly entered the final phase. Whilst there is still a lot of work to be done, most of the walls are now up and the place is a hive of activity as fundis work on the plastering and begin work on the interior. Building supervisor Matt and his family head off on home assignment in April, whilst Tony holds the reigns!

Ruth has been immersed in Sanga administration and end-of-year accounts and is also busy preparing to teach two English courses at Sanga in February and March.

I’m trying to keep the travelling to a minimum during February and March so that I can concentrate on preparing teaching material for the IBM conferences which start in early May. The subject this year will be something along the lines of ‘Show me a leader with moral integrity’, and my hope is that much of that prep will be done before I head off to lead an Oak Hall Israel trip in April.

For those who also like to pray through our itinerary we’ve included some dates below.  Many, many thanks for your support and your prayers.