Hello again, I did say coming soon, so a promise was kept! Unlike January, February has been a fairly slow month, so I’ll try my best to talk about things that happened. Some things, I can remember, however, they aren’t the best memories and fairly humiliating, but there are also good things that I remember. Life is like a dream like that. I did have a really weird dream a few days ago where I was back home, and I randomly kicked my sister in the stomach. And she was playing Assassin’s Creed, and when I realized that, everything went back to normal, and we started a discussion about Assassin’s Creed (weird). Almost, we just kinda… forgot that I kicked her. I would much rather dream about Padmé. So sit back as I blog and watch Torchwood at the same time. I mean I am watching Torchwood as I write, please don’t watch something at the same time as reading this. Or do, I am not going to know. Or will I?

So, we had container day recently. This isn’t an official ship ‘day’, the latest Netherlands container arrived. As a deckie, one of my jobs is to help out with the crane operations on the ship when the containers arrive (A monthly thing) and when the ship gets local delivery of produce (A frequent thing, twice a week.) with the aft crane out of operation until shipyard in Las Palmas in June, we are now limited to using the stores crane for everything. (Everything deck related, not the surgeries and everything else) This means that someone has to be on the dock, slinging up the pallets and receiving the things that come out of the ship (the bin/trash container) and empty pallets. Someone operates the crane, moving these pallets and the bin from the galley hatch to the dock and vice versa, and sometimes to Deck 8. Finally, someone is in the galley hatch, basically doing thee same thing as the guy on the dock. When we get a container, someone is also on deck 3 and the cargo hold, receiving the pallets that come down from the galley to deck 3 via the ONE elevator. We have one elevator for everything, which can make it difficult to work with with lots of jobs going on all over the ship that use the elevator at the same time.
This container day, I was assigned to the dock, where I was slinging up the pallets, whilst Mike, one of the carpenters with my father, operated the forklift, bringing the pallets from the container, at the aft of the dock, to the lifting area on the dock. Clear an LZ, Noble Six! Flynn, our German Deck storeman, was also on the dock with us, working in the containers, bringing pallets closer to the door of the container, for the forklift to move out from the container, to the lifting area. It can be hard work doing all this, particularly with the heat, and working in the sun in  dark blue coveralls, but I do enjoy it, and if it means that the ship can operate,  (Both actual ship stuff, with the Engineering side and the hospital side of the ship) then it’s good work all around, and it makes it easier to deal with the heat. Something that does keep coming into my mind is what is more important. Is it that this is a ship with a hospital on it, or is it that it is a floating hospital. On his visit to the ship in November, Don Stephens, the founder of Mercy Ships spoke to the Deck and Engineering departments at our Thursday devotion. He said that we are the beating heart of the ship. Others say that the hospital is the heart. But to me, it’s all a matter of perspective. I think this should be taken into account when considering the question:

We would normally use the stores crane and the transfer container, but it’s broken down, so we have to do container work by hand now. Technically it was always by hand, but you know what I mean.
At the moment, I do not have pictures from this, but I’ll put them on when I do.

One of the most recent projects for the deck department has been working on the bow mooring deck. This has included…. Cleaning and painting! Pretty much just cleaning and painting. We have given the deck a fresh new coat  of  (insert paint code here) green. So it’s gone from dirty and dusty green with a hint of brown and pale, to a shiny, emerald green! I unfortunately don’t have any before and after photos, but it looks so nice now. What’s sad is that it will ultimately collect dust again and go back to dusty and dirty. Oh well, such is the way of the world. It looks nice now though. Our saying in the deck department is  “The party continues” and “The party never stops”. Which is true, because there is always something to be done.

One of these tasks is greasing. I was working on greasing the exterior doors on decks 7 and 8. These things have to be done, to keep the doors opening. And like lightning, we did a fast job, me and one of our ‘Men of Guinea’. Apart from the doors which had a different greasing point to the other nipple. We have no idea where the other nozzle is. I think we are all done for now. I think this job has to be done every few months.

I finally got round to doing one of the things I have been meaning to do on board for ages. Visiting the wards! John, an Australian electrician, invited me to visit the wards with him, to see one of the patients that he had befriended. We all played Jenga together, which quickly turned from regular Jenga into extreme/engineer’s Jenga. We haven’t decided on a name. This was pretty much the general game of Jenga, however, instead of the regular three blocks on a y axis and x axis, we tried to see how many positions we could put the blocks on top of each other, whilst keeping the tower stable. It went as well as you could probably imagine.

Photo of the month 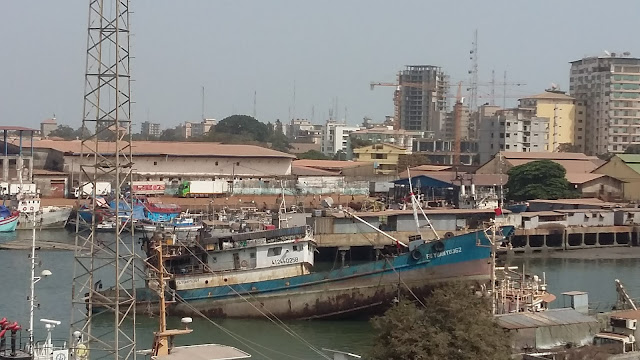 We are also working on cleaning and re-painting the aft crane. Which is fresh new coat of white. On the day that we started working, and I was observing stage working. I am intended to start stage work very soon. Apparently. I’ll try to get some of that filmed and put into a new vlog. So as we were working, this fishing boat tried to moor in the dock, and then that happened. Oops. The Tug boats tried to pull it out before anything worse happened. The next day, the boat was gone, and we don’t know how. Must have been when the tide was really high. There is also a wreck pretty much right next to where this boat was.

When your smoothie spills….

I have made up a proverbial phrase, please use it! If it was a full sentence, it would be “You just kinda freeze and stare at it with the people on your table and wait for a friend from another table  to come over with serviettes and get you a new one.” That happened to me. It wasn’t my smoothest moment in my life. I was trying to set it down on the table, and instead, it just fell through my hands and went everywhere. On the table, and on the scrubs of a new person. (Good job, Matthew. It was only a tiny bit though. But still)  If it happened in slow motion, Jim Croce or Eurthymics would not be playing, One of the following would be a fitting song. In no particular order:
I also went out to lunch one Sunday with Caleb (USA) Laura (Netherlands) Imani (USA) Octavian (Romania – Chief Officer) and Philipp (Switzerland), where we saw some interesting plants by the bay. 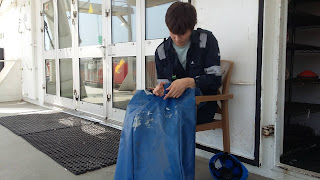 Here are some pictures of me repairing tarp. Look at that determination.

And that’s pretty much all for this month and a bit. I think. I am not keeping track of how long between one update to another. Thank you for reading, where ever you are in the world. Including the few people from Indonesia, how are you? (read my reflection).