The thing that I have only now realised is that I should probably start writing about the events of a week then collate all the things that happened for a month when I set down to do another update. Because, to tell the truth, I have very little memory a lot that has happened since I last wrote. Obviously, I can remember things that did happen, but not a lot. If you have read all my posts (I do a monthly post, and I have only been here for 4 months now, so there aren’t many) you may remember me mentioning how blogging is basically a chore for me now. It’s hard to settle down and remember everything you have done. I am actually impressed by some of these crew who manage a weekly blog, and write them very well. But I think it’s different for me, whilst they are only here for a few months, I am here for two years, so I feel that I have a lot more breathing room to update loved ones back home or wherever they may be and international friends that this crazy season of life has given me the chance to meet and build relationships with. Also, did I mention that I have been here for 4 months already? It seriously feels like a long time that I joined. And in three months, the  Guinea field service will over.

So please, read on, whilst I in the past try to write about the things that I remember and try to remember other things.

Everybody has to say goodbye at somepoint.

I know, I know, that’s a fairly bleak (and ambigious) statement, but sorry kids, it’s true. Fil, my friend and former electronics technician from New Zealand (and Latvia), left the ship at the start of the month. But before he left the next morning we enjoyed a night out in Conakry, which looking back now semi-appeared to be a quest for some live music. Joined by Coltan, one of our officers, Kate, the Executive Assistant and Trinity, one of the bakers, we headed the Le Jardins de Guinee (Gardens of Guinea), an open air restaurant I had heard a lot about and not been to before, and I believe is a hotspot for Mercy Shippers. How can I make this hypothesis? There was another group of Mercy Shippers there at the same time, So we decided to join them. I had already eaten on the ship, so I had a gourmet coffee pudding platter-thing. It wasn’t a platter though, it was a place-mat made from slate. It was very nice, there were mini lemon tarts, candied oranges and a triple chocolate coconut mousse thing. It was one of those dishes that looked too good to eat, but I was hungry, so it didn’t last long. after a game of  doubles pool (le Jardins has a open air games room with a pool table and a table football table) we moved out to Mille Patte (I had been there before, it is in a previous post), where there was live music. And another group of Mercy Shippers! Overall, it was very nice social evening. Kate even got the musician to sing an apparently never ending ‘Happy Birthday’ to Fil after we found out it was his Birthday a few days later.  As it happens, a whole group of Mercy Shippers (I don’t think they were all in the same crowd though) were leaving the same night, including our previous captain, Milo, (Our current captain is Jon, a sort-of ‘reserve’ captain for Mercy Ships. He has captained with Mercy Ships before) so before heading out to find a taxi (totally not the most tense thing about Conakry),  we stuck around to say goodbye  to people. Where Fil was bombarded with “Are you leaving tonight!?” We also said goodbye to fellow nerd, Danita. You may be thinking “That’s a bit harsh, Matthew” but it is a self proclaimed title. And she was part of our DnD group, so you can’t get more nerdy than that. After a very nice evening and a good sleep, it was time to say goodbye to Fil.  It was upsetting to see someone off that you had bonded over a silly joke that didn’t make much sense. Goodbye guys, I miss you!

The British crew and (and passport holders. We had  some Britain-born Australians) were invited to the British Embassy. I decided to dress up for it, seeing as I don’t have much opportunity to do so. We were asked to dress appropriately for meeting the Ambassador, so I did. And it surprisingly wasn’t unbearable in the heat to do so! Was I looking forward to the visit? Yes. Was I feeling the same way when I left? No. Truth be told…. I had the most boring time. What I thought would be an interesting evening was actually a social evening of conversations. I HATE those evenings, because not only am I terrified of conversation, I prefer to actually be doing things at that kind of ‘party’ which was why I didn’t have too much fun at house parties. Crack out some Mario Kart, and I’ll have a blast! The same weekend, the Men’s Retreat…. in the International Lounge…. on the ship…. was taking place. I heard some interesting responses to that, saying how good it was. I now wished I had gone to that instead.

Like every job, working on Deck has it’s pros and cons. The pros are, I suppose, the new experiences and skills and lessons I have been learning, such as operating cranes, forklifts and power tools. Sure, you can tell me “You can learn how to do these things on land” But tell me if you learned how to operate a crane at 18 years old. If you can legally learn how to operate a crane at 18, I don’t know. I don’t know when cranes became a thing, either so if cranes became a thing after you turned 19, I guess my argument is invalid. I did (help)  to build a house in Mexico when I was 16, though. The cons are that, eventually, you will have do every deck related job on a ship imaginable, so then nothing is new anymore. Oh, I haven’t gone on the stage yet. I think we have finished stage work for the field service. At least staging over the side of the ship, there maybe minor, stage work that may come up between now and June. The new thing that I have done is mooring operations. Now, we haven’t left yet, but what we were doing was checking the mooring lines on the astern and forward ends of the ship. If they were too tight or too slack, and all that jazz. So that meant unwrapping the lines from the bollards, and wrapping them round the capstan. One deck hand will then operate the controls for capstan, to either give slack to the line or tightening them, whilst one or more deck hands will hold on to the line to hold the tension. This job requires focus and full attention, as you can imagine, elastic energy transfer into kinetic energy can be messy, if you let go of the line. Snapback is dangerous. and potentially fatal. Particularly with those heavy ropes. When the supervising officer has decided if the slack or tightness is just right, it is a rush to remove the mooring lines from the capstan and re-wrap them around the bollard before they become slack. That also meant more greasing for me! one of the rotating bollards was stiff, so we had to splice two ropes together and wrap them around the capstan and this smaller bollard. And then squeeze some grease into the nipple to get it turning properly. If it seemed like I was insinuating that I have done everything, I haven’t yet. It just will happen. But at the moment, I am pretty much doing everything that I have done before, but somewhere else on deck.  I just got off another week of Night Patrol. That pretty much went the same as the last two weeks. Which was good, as nothing happened, but still. It. Is. So. Draining. Going to sleep in the morning is the most rewarding thing. That and pancakes on Wednesday morning. We, the British crew, tried to get a pancake day thing going, but that that fell through. so pancake on Ash Wednesday had to suffice. Nom nom.
Better than watching the mess being made of Brexit by Westminster. Thanks, Cameron, where have you put your trotters up now? (A Danny Dyer reference, to all you non Brits)

Before I started the long stretch of Night Patrol, I had a night away on Kassa with Caleb, Laura, Laura Kate (USA. Apparently it’s just LK for short) Imani, Rimke (Netherlands) and Michiel (Netherlands). It was so good to get off the ship for a bit. We went to a different beach that I went to before. The others had been to this beach. I also had the first experience of a moto-taxi. We weren’t going to walk, since the beach was the other side of the island, and when we got to the island off the ferry, it was about half past five, and we wanted to set up camp before dark. We got a fire going, and just chilled. And then we chilled on the beach and swam for a bit before heading back to the ferry. Rimke also brought her Ukulele along for some light entertainment 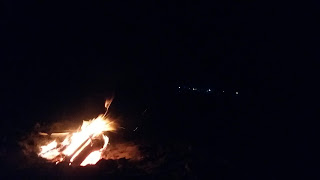 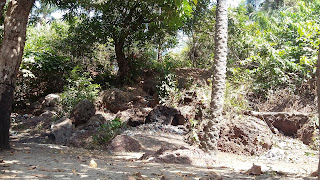 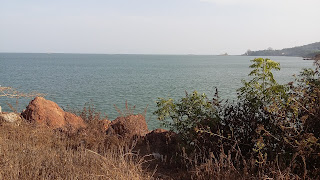 The lives that we save.

This is the story of one of the patients that we have “given new life to” over the course of four months, from the crew that I have spoken to,  heard  at the Wednesday Evening Medical In-Services and promotional material I have seen whilst preparing to work with Mercy Ships, that is one of the statements that stands out to me. I love how powerful it is, and it really does bring up questions in my mind about the lives of the patients. (As previously mentioned before, the communications team on board works to produce material ready for crew use, such as this one, as well as hosting media teams and vision trips) 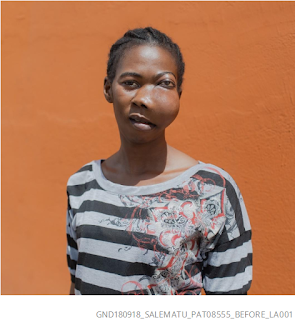 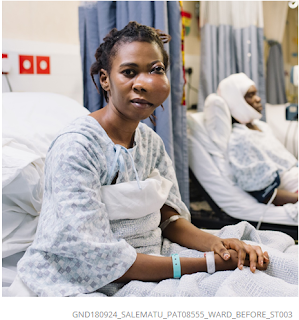 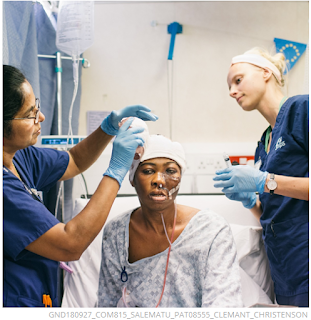 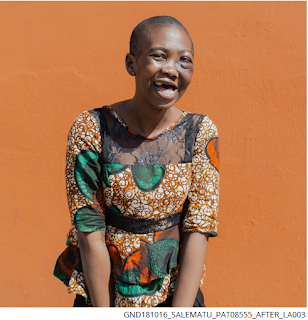 Going back to losing memory of the last month, I don’t have amnesia, it was just…. it felt like nothing happened. But, as the Doctor says “Stories are just where memories go when they are forgotten” So as this vast and wonderful world keeps spinning through our universe, and whilst memories fade, at least know; no matter how small a memory created is, you still leave an invisible mark on the world.

Ok, so no more inspirational messages and philosophy. I’ll finish up now.

Thanks for reading and see you again soon!