We all know that feeling don’t we? That feeling of relief when your luggage finally appears on the carousel!  Some of us have also experienced the other feeling – that anxious and annoyed feeling when the carousel comes to a grinding halt and your luggage hasn’t appeared!  When we returned from Tanzania back in March, we experienced the latter feeling and had to wait 5 days for our luggage to arrive, all the way from……. Amsterdam!  Our home assignment started with a delay and it certainly seems to be ending with a delay….or two!  First of all there was the issue of our residents permits not being ready for our scheduled return in September.  And then just a few weeks ago (following a delay in getting my CT scan results) it was decided I needed sinus surgery to remove polyps, and so this has resulted in a further delay in our return!  So, until 17th November, we’re still very much based in UK.

UK based: the past seven months. You may just about remember that in our last update (nearly 8 months ago!) we listed 20 things that we were looking forward to during our home assignment.  Whilst I could wax lyrical about the whole list, you’ll be pleased to know that I’ve only chosen 8 things from that list as a way of reporting back on what’s been happening.

Visiting Israel. I’ve had the pleasure of leading two Oak Hall trips to Israel/Palestine, one of them with Ruth as my co-leader!  Maybe I’ve said this before (!?) but to teach from God’s Word in the place where it all happened provides a real buzz!  And these trips are often eye-openers for the guests.  You can begin to imagine Hezekiah’s men chiselling their way through bedrock as you wade through his tunnel underneath David’s City!  You can picture Jesus weeping over Jerusalem as you descend the Mount of Olives, and, as you mingle with the crowds in the bazaars in the old city, it’s easy to visualise what a busy Passover festival would have been like.  And then, when you sail on the Sea of Galilee or sit on the shore, you can almost hear the words of Jesus as he teaches the crowds or stills the storm.  And so I could go on! 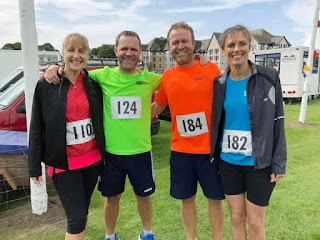 Running in cooler climes. We both enjoyed running the country lanes of Wiltshire in preparation for the Nairn half marathon in August.  My time of 1hr 58 mins over 13 miles was slightly faster than Eliud Kipchoge managed in Vienna last weekend, although it might be fair to point out that the professional Kenyan runner covered twice the distance in that time!!
Here we are with bro Lancs and Kerri.

Spending quality time with family and friends. It’s been great to catch up with family and we’ve enjoyed some top times together!  We were able to see Steve’s youngest sister and her family for the first time in six years, and had the privilege of doing a mini-preach at my Grandad’s funeral back in July – just a month after his 97th birthday!  There have also been some awesome family holidays in Scotland to add to the memory bank.  Ruth enjoyed being able to celebrate her parents’ birthdays in September and October – Mum was 90 and Dad was 89.

Food variety. Bring out the pork pies!  And that could be the reason I’ve put on 7kgs (1 stone)!  We’ve enjoyed being able to eat salads without having to bleach them beforehand, and, as a bread fan, I’ve enjoyed eating some of the 20+ different varieties currently found in Morrison’s!  In Morogoro, brown bread is a relatively recent addition.

Driving on smooth roads where most people adhere to the highway code!  I realise that some of you will question my judgement on this one, but I’ve found driving in the UK to be relatively relaxing!  I’ve been amazed that drivers actually let you out at junctions!  It also makes a nice change not to see police jumping out of bushes with a tampered speed camera in hand! 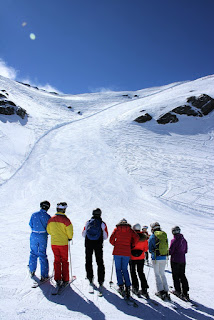 Skiing. What better way to unwind from the heat of Tanzania than to head to the Swiss Alps?!  We enjoyed a great Oak Hall skiing trip for five days back in March.  Somehow we covered 199 miles in distance and skied 170,000 vertical feet – although not all in one drop!  For those familiar with the Jungfrau ski area, I also managed 58mph on the wall of death; still shaking!!

Climbing a mountain or two. Definitely delivered on this one!  A number of minor Lakeland summits plus the Welsh summit of Snowdon were climbed.  We were also able to stand on the same mountain on which Moses stood (Mt Nebo) as he looked across from Moab (modern-day Jordan) into the Promised Land.  The view from Mt Masada (Israel) is also said to be one of the finest in the Middle East, although it’s more of a cable-car ride than a climb!  And during the Oak Hall Iceland trip that I spoke on, we stayed just a few miles away from the volcano that caused so much trouble back in 2010 – the one that no one outside of Iceland can really pronounce: Eyafjallajokul! 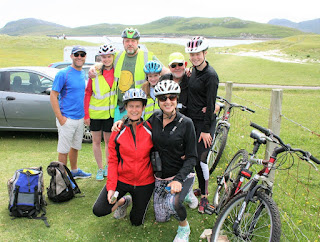 Cycling the Hebrides. What a week up in the southern Hebrides in July!  Along with some of the family, we cycled 95 miles on the islands of Barra, Eriskay, South and North Uist, Benbecula and Berneray.  Fantastic beaches, stunning scenery, and some quality birding: lots of short-eared owl and hen harriers, plus white-tailed eagle and snipe. 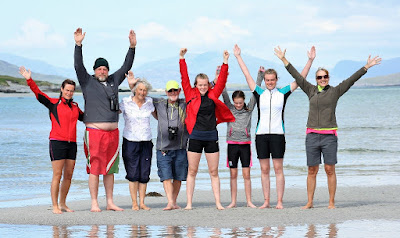 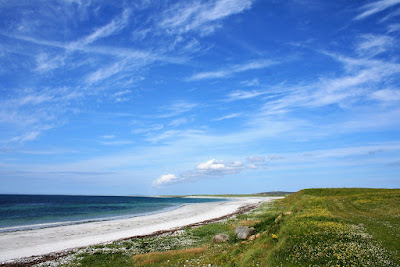 Not being at the mechanics on a weekly basis! We’ve managed to put 13,000 miles on the ‘little red blimp’ (mums car!), and apart from a standard service, we haven’t had to see a mechanic!

Being at our home church. We’re blessed to have a supportive church behind us (Corsham Baptist) who not only support us financially and prayerfully, but also send out teams to help at Sanga Sanga and at various AIM conferences – so we feel the connection is pretty strong!  We’re also blessed to be fully supported so we haven’t had the added stress of having to raise funds while at home.  I was asked to do the Bible teaching at our church weekend back in June and was given four 1 hour slots to focus on the Upper Room chapters in John’s Gospel.  Not sure about the folks there, but I very much enjoyed having quality time to preach in English!  We’ve also presented at a number of other churches in Liverpool, Lincoln, Carlisle and Chippenham, and I’ve been able to preach/teach on 30 occasions, including at the AIM Fellowship Conference in London and a warehouse church in Iceland!

Delays & Deferrals are plentiful in the Bible!  Think about Jacob waiting to marry Rachel for 14 years!  What about the Israelites who took 40 years to enter the Promised Land when it could have taken them less than 3 weeks; that’s a huge delay!  The Apostle Paul was ‘delayed’ in Caesarea for two years sitting about waiting for his trial to happen.  Elisha was anointed Elijah’s successor but then had to wait 7 years for Elijah’s chariot to appear so that he could become Israel’s main prophet!  Jesus himself chose to delay for a few days on hearing about Lazarus.  And according to Daniel 10 even angels sometimes get delayed in their duties!

One of the passages that I preached on recently involves a delay, albeit a slightly shorter delay than the ones mentioned above!  Mark 6:47 says, “When evening came, the boat was in the middle of the lake, and Jesus was alone on the land.  He saw the disciples straining at the oars because the wind was against them.”  We are told in the next verse that Jesus went out to them, walking on the water, during the 4th watch of the night (3-6am).  The disciples had been on the lake since late the previous afternoon, wrestling with the wind and battling with the waves. They were still in that position 10-12 hours later!  And yet remember, Jesus had seen them straining at the oars the previous evening!  He knew about their situation and the ordeal that they were facing but he chose not to come to their aid immediately.  Jesus chose to delay his rescue operation!  Why did he wait until the 4th watch of the night?  We simply don’t know.  Maybe the disciples asked that same question!

There are some delays in our lives that work well for us and, as we look back on them, we can see a clear reason for the delay. We can even thank God for the delay because in His sovereignty He works these things out and knows what’s best for us. There are, however, other delays which are painful to bear and we long for God to remove them – we just can’t see any logic in the delay. In fact it feels as though we’ve been sitting in our storm-tossed boat for too long, crying out for God to intervene, but He seems to delay in coming to our aid.

Be assured, the Almighty God sees you straining at your oars and, at His appointed time, He will come to your aid.  Somehow, in the midst of the delay, He is working His purposes out for your life.  It is during the delays, some of which can be quite stormy, that God teaches us about Himself.  He calls us to trust Him through the delays and through the storms.  Indeed, without the delays, stresses, trials, and even failures, we would never grow to be what we should become as Christians.  They are a vital part in our spiritual growth, even though at the time, we might not like or appreciate them.  Father God, grant us grace and patience to face the various delays that You, in Your sovereignty, have allowed to happen.

Onwards and southwards! Hopefully, if all goes to plan in the nasal department, we’ll be flying back to Tanzania on Sunday 17th Nov to begin our third and final term at Sanga Sanga (2 years).  Ruth will continue to work closely with Pastor Batano in the management of IBM & Sanga (bookings, admin and finance), and I’ll continue in my role as a Bible teacher amongst the pastors and evangelists of the AIC.  I will also continue as AIM unit leader for Tanzania East.  When we get back we’ll be returning to the same house in Morogoro, and hoping that our night guards haven’t moved in during our absence!  One of the first lengthy jobs will be to get the cars started, whilst hoping that the engine compartments haven’t become a nesting place for termites, rats or snakes!  One of the cars also needs some new brake disks, which I’m told can’t be obtained in Tanzania, and so packing that 14kgs of steel into our suitcases is going to be a bit of a challenge!

It will also be quite strange returning to Morogoro without the Swansons or the Dixons being there, but we’re looking forward to working with our new team-mates (Joel & Lauren Wildasin), who arrived back in May and seem to have got their feet firmly under what was the Swansons’ dining table!  So, onwards and southwards we go, back to the mighty continent of Africa, and in His strength we’ll carry on the work that He’s given us to do for this next chapter.  We’re fully aware that “there is nothing in us that allows us to claim that we are capable of doing this work” but we know that “the capacity we have comes from God” (2 Cor 3:4). And so we commit ourselves to Him and ask that He would use us mightily for His purposes, despite our weaknesses and our ‘jars of clay’ fragility!