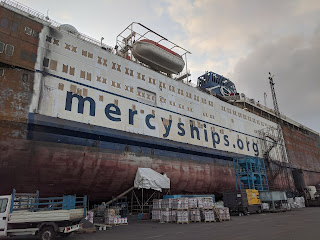 Our home for a few years getting grit blasted to remove the paint and rust. 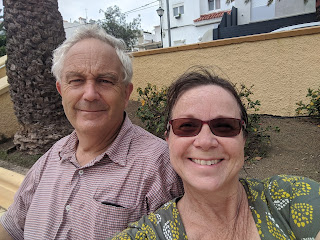 So, it’s been some time since we have blogged, long months have passed by, suddenly it has been well over a year since Covid demanded our retreat from Senegal and we made a dash from Dakar in Senegal to Granadilla in Tenerife.  18 months on we find ourselves on the Africa Mercy (AFM) in dry dock in Las Palmas, Gran Canaria coming to terms with the facts that we will remain in the Canaries for the remainder of this year and not be returning to field service in Africa until early 2022.  How did this happen?!

Before leaving Africa, the hospital ceased operations and all our patients were either discharged or placed in local care to fully recover.  Lynne’s work as hospital Administrator came to an end and she is now the HR Director on board after spending a short time in Hospitality sorting and cleaning cabins that were abandoned in the exodus from Senegal.  The position of HR director became available after previous incumbents left early due to Covid and then her replacement ended their commitment early due to pressure of work.  So, Lynne is now working in a senior position with only a couple of experienced staff, not enough to do the job and is feeling the pressure.  The pressure has been exacerbated by the need to quarantine crew either on board or in local hotels and find ways for our African crew who find themselves on European soil with no visas to return home for leave and then return to the ship.  Times are not normal.

Matthew completed his two-year term last summer when we all travelled back to the UK and Lynne and I took taking the opportunity to settle Matthew into his University in Lincoln.  He is studying History with Archaeology, something very different after working with the deck department onboard.  We are so proud of Matthew of the way he conducted himself on board and that he has identified history as a subject that energize him.

Lynne and I returned to the AFM in November to make ready to sail to Africa in January but soon learned that this would be delayed until May ’21, this was disappointing but understandable.   Ship staff continued to carry out maintenance and sort the belongings of crew who had left the ship from Senegal at a rush expecting an early return.   Thinking we would arrive in Africa in May, Lynne and I came back to the UK to see our family and get ourselves vaccinated, but soon after returning on board we found out that our return to Africa would not happen until early 2022.  After so many months closed up on board on a remote and windy half constructed port with only short spells of a few hours shore leave granted, this was yet another blow.  Many crew started to re-assess lives and decided that it was time to leave the AFM, either for good or until the pandemic has passed and the mission of the AFM can restart.

Delaying the return by so many months gave opportunity to carry out some serious ship maintenance so we sailed to Las Palmas on Gran Canaria, the island a few hours to the east of Tenerife where we were lifted out of the water and placed in dry dock for thirteen weeks which is where we are now.  All the paint has been grit blasted off the ship, about 80 holes have been cut into the hull either to gain entry into tanks for cleaning and painting, or to cut sections of rotting steel out to be replaced with new.  Work continues on board 24/7 on fire main, sprinkler systems which have been drained and parts replaced and the tank work.  My project was to replace 130 windows onboard with a team from Poland.   All this work is intrusive to life on board a vessel with limited ventilation and most spaces at an average of 30oC.  We are also very short staffed and have needed to employ contractors for many key positions and non-technical crew are staying off ship overnight for comfort and safety reasons.

We are grateful to so many short-term volunteers who arrive from so many nations and of many and varied faiths, with a crew of around 100 there are about 40 nations represented.  As a religious order, (it is – Mercy Ships has a legal status as such) with so many non-Christians on board, a split crew living on and off the ship,  we are making extra efforts to maintain times of prayer and worship and retain a focus on the mission of Mercy Ships and our four core values: Love God; Love and serve others; To be people of integrity; and Strive for excellence in all we say and do.

So here we are:  serving, working hard and long hours, struggling with constant change, the heat, and an uncertain future.  This is the joy of the Lord! 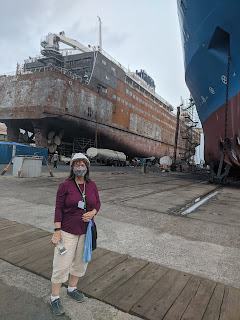