One of the last things that a visiting preacher wants as he addresses his audience is a distraction, especially when that distraction sits in the middle of his face! That was how it was as I went to do the Bible teaching at a church weekend conference in Iringa back in September – a swollen nose that was glowing with an angry redness! Joy of joys – the boil emerges! So, conscious of my red snout, as I stood to introduce myself I decided to get the ‘Rudolph’ reference in before anyone else did and urged the listeners to “fix their eyes not on what was seen but on what was unseen” (1 Cor 4:18)! Despite the throbbing hooter the weekend went really well, and I enjoyed being able to speak out God’s Word in a language I was comfortable with! We also appreciated meeting up again with folks from the Iringa Christian Fellowship – people we’d met during our intensive language course last year. And whilst it wasn’t exactly a plague (we had three each, one of which was on Ruth’s eyelid!) we’re both pleased that the unexplained boil season is behind us for now! 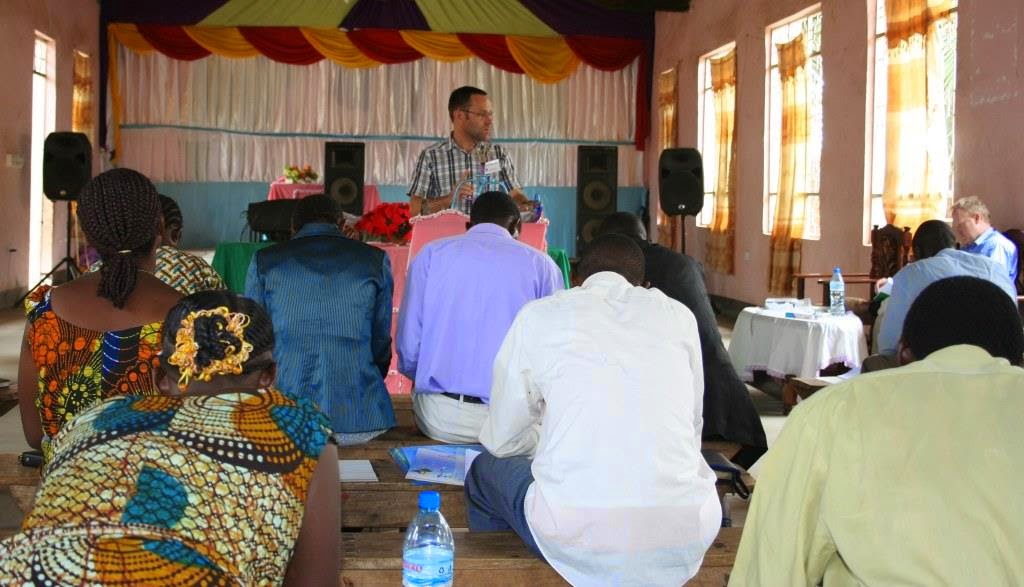 And then, as September came to an end, it was on to the Ifakara Conference where 25 AICT pastors and evangelists gathered for some teaching on church planting and discipleship. Ruth was there in her role as Communications Officer, dealing with administration and finance, and I was able to practise my Swahili, teaching three sessions on prayer and what it means to be a disciple of Jesus, relating these issues to 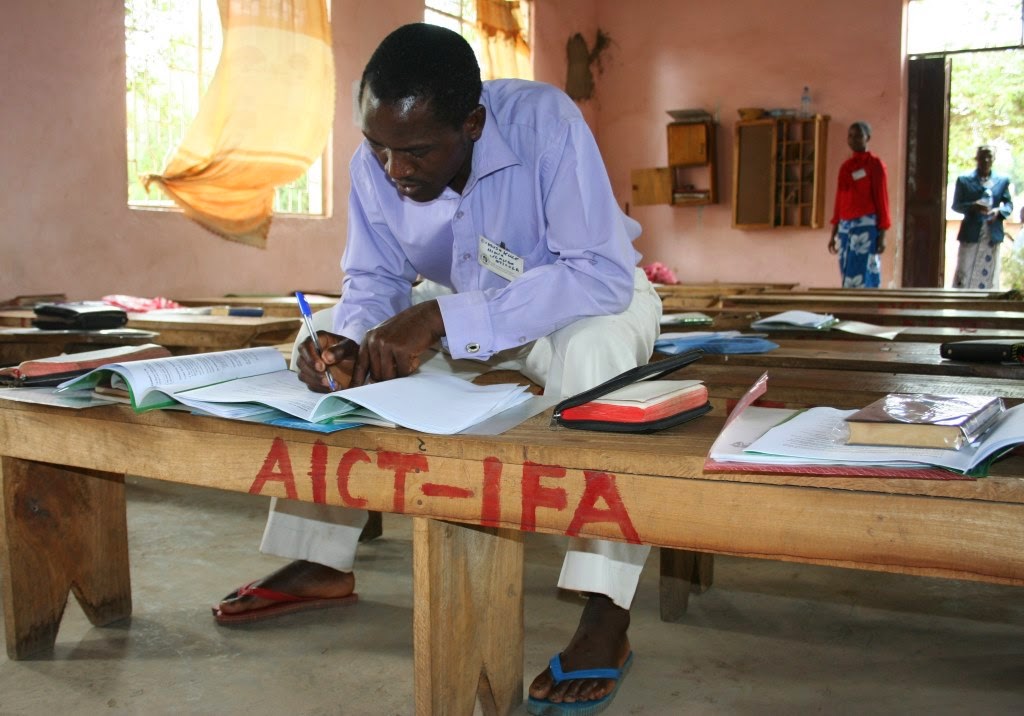 evangelism within an Islamic setting. Many of these pastors minister in areas with a high proportion of Muslims in their communities and so some of our teaching this year has been focused on taking the gospel to such people. One of the evangelists who attended the conference, a lady called Tausi, is from a Muslim background and knows all about the pressures of being a Christian within a Muslim environment. Last year her husband died and she was left with their four children, one of whom was taken by Muslim relatives (at the funeral) to live with them in the north of the country. The other children are now being pressured to move away from her – and she is of course desperate not to lose her children. Please pray for Tausi as she faces this battle and for the church as they support her.

Oak Hall Israel: Three days after the Ifakara conference I was sitting on a plane bound for the Middle East to lead another Oak Hall Israel trip – and what a trip of contrasts it was! From the hustle and bustle of Jerusalem’s old city to the long-deserted cities of Capernaum and Megiddo; looking across to the highest mountain in Israel (Hermon) to being in the lowest city on the earth (Jericho); from the night-time street-party atmosphere outside our East Jerusalem hotel to the tranquil surrounds of our accommodation on the shores of Galilee; from the heat of the Judean desert to the relative cool of Hezekiah’s tunnel – and so I could go on! The trip went extremely smoothly and I so enjoyed leading and guiding this tour, with a lot of help from my friend and one-time Bible College tutor Bob Hunt. 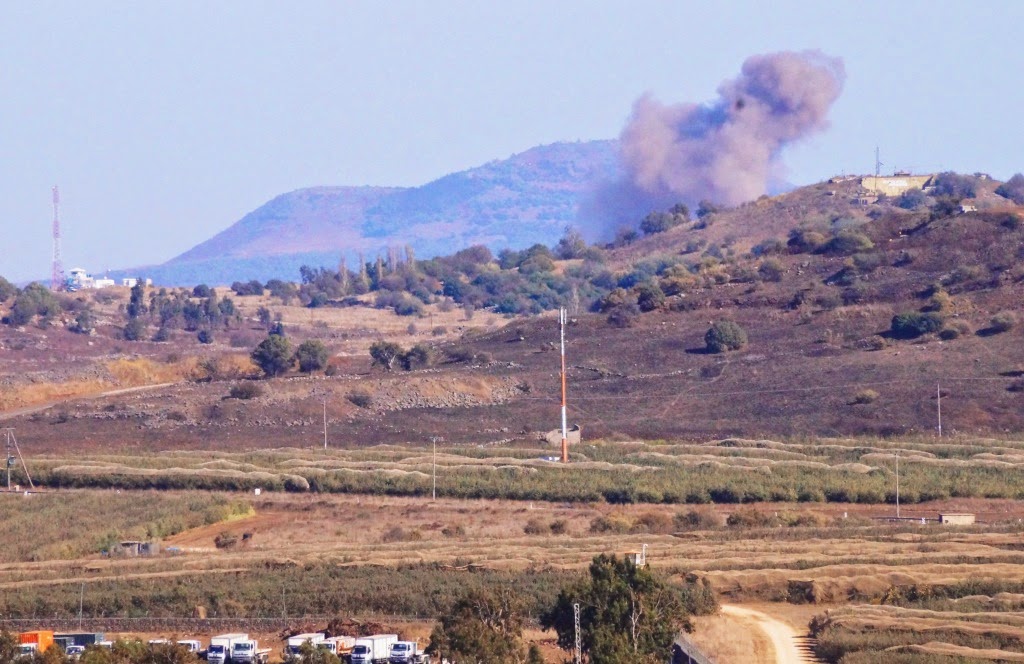 As you’ll be aware, Israel is a land of constant tension and the number of Israeli soldiers on the streets of old Jerusalem bear testament to this. However, despite the various checkpoints and the fact that our visit occurred only five weeks after the conflict in Gaza, we didn’t have to alter our tour schedule and nor did we encounter any problems. There was, however, one moment on the Golan Heights where eyebrows were raised by a few of the guests! As we looked out over Syria, and I began to read about the Apostle Paul’s journey to Damascus, a couple of bombs/rockets landed about a mile away, sending up clouds of smoke and debris! It gave us a tiny glimpse of what many people in Syria have been experiencing over the last few years as the fighting was between two rebel Syrian armies near to the Israeli border.


The Oak Hall Israel trip is certainly a full-on tour but one that has a lasting impact on the guests. One of them remarked at the end of the trip that, “It was wonderful to be able to put the various places into perspective; to see the terrain, feel the heat and walk the walks. It’s going to open up a new vista as I read the Bible, being able to visualise the places and events of the both the Old and the New Testaments.” I say it every time, but I’ll say it again: I find it such a blessing and a privilege to be able to introduce folks to the sights, sounds, smells and significance of this fascinating land; and that despite a rather lengthy return journey to Tanzania of 32 hours!

Three days later Ruth and I attended the AIM Tanzania conference, enjoying the not-so tranquil environment of Dar es Salaam! Our accommodation was situated rather close to a huge road-building project where work continued 24-hours a day! It was good to meet up with other AIM colleagues from around the country and to hear of the blessings and the challenges they’re facing in their various situations. We enjoyed some teaching from the book of 1 Thessalonians, brought to us by a pastor from Nottingham, and it was a refreshing change to be able to sing God’s praises in full voice, in a language we were familiar with. Another reminder that we were in Africa came during one of the afternoon tea breaks where, along with the regular tea and coffee, popcorn and chicken gizzards were served!


Yet another three days later and we were back in Delightful Dar – this time for another pastors’ conference, seeking to “enable, mobilise and inspire” the AICT pastors in the Dar region. Again, I was using the Miraculous Movements book to focus on prayer and discipleship, and to highlight the fact that God is speaking to thousands of Muslims across Africa through dreams and visions, calling them to Himself. We looked briefly at the subject of dreams and visions in the Bible and there was a resounding response of ‘yes’ when I asked whether they thought God still spoke to people in that way today. I asked the pastors whether they had had any experience of God speaking to them through dreams or visions (maybe a dangerous question to ask!).

One man (Pastor Malelo) told us that he’d had three identical dreams over the course of a few nights, where he had been travelling in a bus that had crashed, causing injury and death to some of the passengers. He was shortly due to go on a journey by bus, and wondered whether these three dreams were a warning for him not to go. He chose to ignore them and went on his journey. He was unable to sit in his allocated seat because someone else was already sitting there. Miles down the road the bus did indeed crash causing injury and death. Pastor Malelo suffered injuries which kept him in hospital for six months but the man who was sitting in his seat died of his injuries. I’m not in a position to say for definite whether these were godly dreams of warning, because I didn’t have them, but having heard a number of testimonies down through the years, and having read books like ‘Miraculous Movements’ I have no doubt that our God is still in the business of speaking into people’s lives in this way today, especially amongst Muslims who are secretly searching for a loving God.

I’ll also remember this conference for something that happened during my first session – and it’s a problem that every preacher faces. It was indeed the dreaded ‘after lunch’ slot and even though we were meeting outside under the shade of a thatched banda, the temperatures were a tad stifling. Half way through my talk I spotted a couple of guys who could have uttered the words of Jesus to those three disciples in the Garden of Gethsemane: “The spirit is willing but the flesh is weak”! The fact that their heads were at a 90 degree angle to their bodies gave it away! I’ve often wondered whether I would have the nerve to stop what I was saying and, in a very gentle way (of course!), encourage such people back into the land of the living! Well, I didn’t have to on this occasion because one of the other pastors interrupted my talk to inform me that we had a number of people who weren’t paying attention! Heads swivelled from side to side and a fair bit of poking ensued, and the two rather sheepish sleepers were roused back to life – brilliant! Maybe I’ll employ the ‘sleeper-watcher’ on a permanent basis!

Praise & Prayer: So – that’s what it’s been like in the Lancs Lane over the last few weeks. We’re so grateful to those who pray for us, and always humbled when people write to assure us of their prayers – thank you. We’re grateful to God for safety on our travels; for smooth and uncomplicated journeys during the last few months, and also for the health and strength to be doing what we’re doing.

As you’ll see from the diary, we’re planning a two week holiday in UK over Christmas and New Year. It’s an unexpected blessing to be able to do this, coming at the half-way point of our first term in Africa, and so we’re chuffed at the prospect of spending some precious time with family, two of whom we’ve never met before!

We have two more pastors’ conferences that we’re involved in before the year comes to a close and we’ll also continue with our language learning – which leads me on to a request for prayer – and the issue of ‘botheration’ – an exclamation indicating vexation or annoyance!  Time for a bit of honesty!  Whilst I am able to teach a number of repeated sessions in Swahili, I’m preaching from a script and am becoming increasingly frustrated that I’m not learning faster than I am. Maybe it’s about unrealistic expectations on my part; maybe it’s the learning method I’m using; maybe it’s because I’m not feeling as useful as I’d like to be, or maybe it’s simply a case of being fifteen months in and realising there aren’t any short cuts!  In short, as I said to my bro the other day, I’m fed up to the back molars with language learning! It feels as though I’m swimming through treacle and the motivation levels are down, my patience threshold is wavering and I’m in danger of becoming a disgruntled cynic!  Don’t panic – it’s not a case of “I’m a missionary, get me out of here”, but I would certainly appreciate your prayers on this front, as I seek to press through this ‘botheration’ and finish the year well. Oh – and as for Ruth – she’s loving it!! She comes to the end of the current course in a few weeks’ time and would appreciate prayer for wisdom as she seeks to find a language helper using a more conversational method for the next stage. Many thanks for your support – and for reading this far!


Random photos of the month: