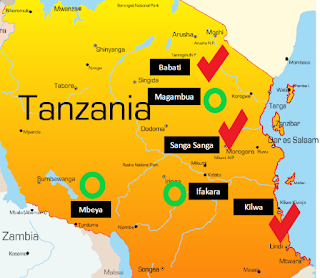 Three down, three to go! In our last newsletter we used this map to indicate where our six regional pastors’ conferences would be taking place. We’re now able to put three giant ticks alongside three of those locations, and the fourth one will be taking place this coming week when we head off to the backwaters of Ifakara. Thank you to those who have prayed for me during these seminars. Each conference and venue has its own distinctive flavour but one constant is that folks here just don’t seem to get fazed by distractions! During the first conference in Babati we had children peering through the windows and the sound of a nearby band-saw cutting wood! In the Kilwa conference the unfinished floor of the church was as level as the Uluguru mountains, with clods of clay-soil increasing the risk of much ankle-twisting! It didn’t seem to matter to them! Nor did it matter greatly, during the last session of the last day, when someone spotted a venomous snake curled up in a crack in the wall, high above my head! It was ironic that the topic we had been looking at was that of Satan and his scheming! Peter talks about Satan prowling “around like a lion looking for someone to devour” (1 Pet 5:8), but we also know that Satan slithers around as a serpent looking for people to deceive, even within the walls of the church! One of the pastors grabbed a stick and quickly ‘dealt with it’! “Resist him, standing firm in the faith” (1 Pet 5:9)!

During the recent Pwani conference, which was held in the relative peace and quiet of our Sanga HQ, a couple of dogs and a bleating goat made an appearance in our un-walled thatched banda – but again, it didn’t seem to distract the listeners! As for me, it often seems like an uphill battle trying to ignore these various distractions, whilst also trying not to lose my train of Swahili speak! Oh the joys of preaching in Africa! There is one exception that I can think of, where mobile phone distractions obviously grated with a certain pastor! On the wall of his church there is a notice quoting a verse from Habakkuk that says, “the Lord is in his holy temple; let all the earth be silent before him”, along with the accompanying words: “please switch off your phone”! Anyway, distractions aside, the teaching on 1 Peter seems to have been well-received, and about 70 pastors/evangelists now have enough material to craft at least 20 sermons for their congregations! All part of AIM’s goal to see “Christ-centred churches amongst all African peoples”. Onwards to Ifakara, Magambua and Mbeya!

Changamoto Kubwa! One of the most challenging verses that we look at in 1 Peter comes towards the end of ch 2: “Now that you have purified yourselves by obeying the truth so that you have sincere love for your brothers, love one another deeply from the heart” (2:22). In Swahili I would say to the pastors: “Hii ni changamoto kubwa sana.” Roughly translated it means “This is a big challenge”! And don’t we know it!? Loving one another can be tough and we can only do it effectively in the power of the Holy Spirit and not in our own strength. Leading on from this verse I then head towards John 13:34-35 where Jesus instructs his disciples (and us!) to love one another, stating that if they do this, outsiders will realise that they are followers of Christ. Love is indeed the key to the gospel isn’t it? Paul says to the Corinthians that if we lack love in our lives, our witness amounts to nothing.

I recently heard a great story that highlights the importance of love within the Christian community; love for each other and love for those who do not know Christ. We have an AIM team living out in the Tanzanian bush that I sometimes visit and they’re seeking to live out the gospel to an Islamic people group. This is what one of the team said: “One day I happened to be sitting in the market with some of the local men who didn’t know that I was part of the team. Two of my team members happened to be passing by and, as always happens when they go to market, kids came flocking! I heard one of the elders from the mosque comment: ‘Do you see that? Before long, this area is going to become Christian.’ The team member sitting in the market asked the elder what he meant and the elder replied: ‘Those Christians really love our people. They care for people when they are sick and they visit their neighbours every day. They really love and pay attention to the kids, and they’re even learning our language. That kind of thing is so different from how we are… it’s irresistible. That’s why I say this area is going to become Christian.’” Wow! What an encouragement that was to that particular team, and what a reminder to us of how important agape love is as a witness to those who don’t know Christ. Father, fill us with your love; strengthen and equip us to love each other, so that a watching world may be drawn to your irresistible love.

Conference Centre Opening: Following hard on the heels of our Pwani conference in July was the long-awaited opening of the conference centre, three years after the project began. Ribbons were cut, plaques were unveiled, and cameras clicked as we gathered to give thanks to God for the people who had helped to make it possible. When Solomon had finished building the temple in Jerusalem all those years ago, his prayer of dedication was recorded for us in 1 Kings 8. In response, the Lord said to Solomon: “I have consecrated this building which you have built by putting my name there forever. My eyes and my heart will always be there.” (1 Kings 9:3b) We’ve had that reference inscribed on a stone tablet near the main entrance and, having dedicated the building to God, we trust that He will indeed always be there and that His powerful presence will be felt by those who use it. The Centre will be used by the AICT, various other churches, kids camps and other organisations and our hope is that God’s name will be glorified in what takes place there. We also want to thank the various people and churches that have contributed to this project, and especially to Oak Hall for their generous support; hence the reason for the naming of the main hall! 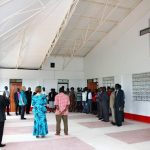 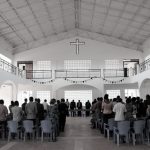 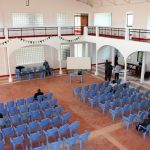 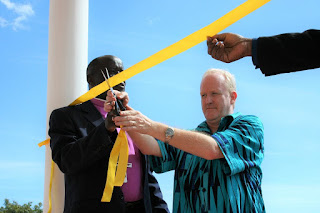 Time off and random holiday happenings! In the middle of July my sister and her family came for a ten day holiday and we had an awesome time introducing them to all-things Tanzania. We certainly packed a lot in: swimming in the Indian Ocean, playing tennis in the heat, experiencing the bite of the notorious Tsetse flies whilst on safari, climbing gigantic Baobab trees, walking up the Uluguru mountains, wandering amongst the rickety fruit and veg stalls of Morogoro market, and sitting in a three-hour church service; what more could you want!? In regard to the latter, they coped admirably, and even introduced the congregation to the chorus ‘My God is a great big God’. Not so sure Ruth appreciated trying to translate the words, “He’s higher than a skyscraper and deeper than a submarine’! However, one of my favourite memories was introducing my bro-in-law (Phil) to the game of golf! It turned out to be quite a random game! On the 8th hole, as we prepared to tee-off, we encountered a Masai choir strung out across the fairway filming a DVD! I’m not so sure they had ever seen a golf ball before, but they signalled that we should play on, and so we walloped (not an official golfing term!) our balls down the fairway. From 150 yards my ball sailed over the heads of the dancing Masai, whilst Phil’s ball left a dent in the back of a Masai warrior! However, there didn’t seem to be too much hard feeling, as Phil and the family were then invited to star as guest dancers in their production! My lasting memory will be of Masai warriors dancing with their sticks, alongside Phil dancing with his golf club! Only in Tanzania!

Dates for the Diary:

Prayer Requests:
Please pray for Ruth as she deals with administration and financial ssues, along with managing guest bookings. We’re currently looking to recruit an accountant/book-keeper for 12 months, so if you know of anyone who might be interested, please give them a prod! Please pray for me in the remaining conferences; that I would teach faithfully & biblically, and that the pastors would go away spiritually well-fed and better equipped to feed their congregations.

We currently have a team of 17 people from All Souls, Langham Place, London, staying at Sanga Sanga. They’re here to experience the Tanzanian culture and to help out around the site. In mid-August we’ll also be getting ready to receive 22 guests from Oak Hall. Please pray for Ruth and I as we lead that trip, and that people would be challenged with regard to mission, and what they can do to help build God’s kingdom. 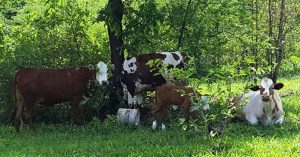 We are sad to report that Sanga Sanga’s cows were recently stolen – by the security guard employed to guard the site! As you can imagine, this has been very disheartening for all the team and workers at Sanga Sanga. The thief is now in custody but the cows haven’t been found yet. Please pray that they would be returned to us. They aren’t just valuable in themselves but also provide a useful source of income through selling their milk.

Please pray for our team here in Morogoro. The Swansons (Tony just recovered from pneumonia) leave in December, although we’re encouraged that a family plan to join us here in January next year. We’d also be grateful for your prayers as we think beyond our next home assignment (Mar-Sept 2019), and ponder the question of whether we should return here for a third term.

Thank you for all your prayers and support!